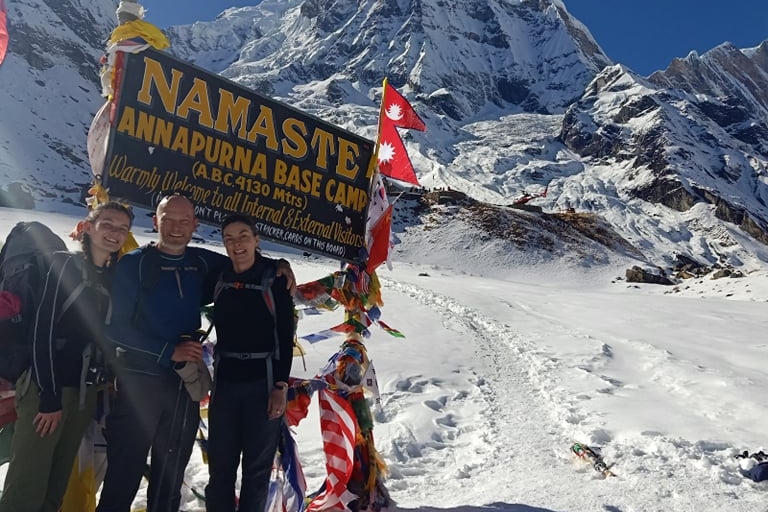 Short Annapurna Base Camp Trek is the most energizing strolling outing to the base camp of world’s tenth tallest mountain Mt. Annapurna. The voyage is brimming with energizing Gurung Villages, green rich woodlands and numerous tough downhill landscapes. Trekkers will feel cheerful as they would investigate through Himalayan and bumpy scene all together. The excursion speaks to the most energizing stories of Nepal’s enhanced trekking district i.e. Annapurna district. The trek would be a reward demonstration of going as it envelops Ghandruk, Annapurna Base Camp, characteristic hot springs at Jhinu and Lake City Pokhara.
The outing of Short Annapurna Base Camp Trek begins like consistent longer Annapurna Base Camp trekking by means of Ghorepani Poon Hill trek Route. In any case, trekkers take the course of Nepal’s first model town of Ghandruk rather than Tikhedhunga Ghorepani course. The time spent on this town alongside the social program will start the new feeling of understanding Nepal’s provincial setting. After this town trekkers will be stayed outdoors at Chhomrong and Himalaya before going to Annapurna Base Camp by means of Machhapuchhre Base Camp. Investigate both of these base camps and feel the cool wind of mountain air. The time spent on these brilliant spots would be recorded for a considerable length of time to come as you can impart to your up and coming ages and companions gladly.
The outing after short Annapurna Base Camp would be through bamboo woodlands and common heated water springs at Jhinu. Unwind your muscles and get eased of any skin maladies by dunking into the characteristic heated water before heading to Pokhara.
Book this stunning short trekking bundle with Nepal Adventure Pilgrimage Treks & Expeditions. We will guarantee that you will get plenty of attractions even in the short Short Annapurna Base Camp Trek.

Annapurna region is the right place to trek all over the year. The people can trek in all seasons in the Annapurna region.The March to May and October to November are the most popular trekking months in Nepal. The Himalayan peak is the coldest region so you should avoid the monsoon and winter season to trek in the high altitude. During the winter days, the temperature will be below minus. On the monsoon season, the trekking routes are damaged by the rain. But You can able to trek in the Annapurna region on rainy days
Best Time to Visit Annapurna Base Camp
Annapurna Base Came Trek  is one of the famous trek among all treks in Nepal. Autumn and Spring are the best time to visit Annapurna Base Camp. Most of the time trekker trek from Nayapul about 40 kilometers northwest from Pokhara to Ghorepani. The nostalgic viewpoint of Poon Hill is seen. Then thought it you can take east to Chhomrong and turn to North and it leads to Annapurna Base Camp. It is surrounded by colorful flowers, a clean sky with beautiful hills and mountains.
Short Annapurna Base Camp trek is done every year. But the difference is in weather conditions each season has its own beauty over trails. So, you can choose when to go trekking according to weather conditions. The Best season to go trek is in Spring and Autumn respectively.

Above itinerary is basically a guideline. If you're not satisfied or have an alternative plan please feel free to discuss it with us.

Arrive in Kathmandu at any time. Our airport representative will welcome you and explain the program further. There are no planned activities for the day, so check into the hotel. Evening welcome dinner with cultural show.Overnight at hotel.

Fly to Early morning We begin our trek with 2½ hours drive along the snake line road to Siwai via Nayapul and Birethati villages, located near the river Modi where our first day starts past several farm villages with scenic waterfalls then cross short bridge over Kimrong khola and ascend on stone staircase to Jhinu Danda village as the climb leads through terraced farm areas uphill walk brings you to Chhomrong, a village for overnight stop. Tremendous view of Annapurna South ,Fishtail, Hiunchuli and Annapurna III visible from here. Chhomrong is gateway of Annapurna Base Camp trek. This is a large and last permanent Gurung village before Annapurna base camp other places on route beyond Chhomrong are temporary settlement to cater the need of trekkers with lodge and guest houses all the way to Annapurna base camp.

Morning walk downhill to the river, then crossing a short bridge heading up to reach at Sinuwa at 2,330 m high, a lonely spot with few shops and nice lodges walk from here leads into cool forested area of oaks-rhododendron and pines trees and then a short steep descend to Bamboo a small settlement with 5-6 lodges surrounded by bamboo trees, On Modi River gorge.It is very easy trek by ascending gently all the way through rhododendron, oak and other kinds of dense forests. You could hear different kinds of birds chirping on the way Himalaya.

We trek from Base camp to sinuwa which takes 6-7 hours. From the Annapurna base camp we retrace our steps to Bamboo. Today’s trek is downhill so it shouldn’t be very difficult. Besides, we will always have the company of the extraordinary landscape to cheer us up. Overnight in sinuwa.

From Sinuwa trail descend to Chhomrong khola,after crossing short suspension bridge trail leads up to the top of Chhomrong village. After Chhomrong, trail descend all the way to scenic and lovely Jhinu village located on a ridge top with views of surrounding landscapes and rolling green hills and then short descend on stone stairs reaching at another Nayapul (New Bridge), from here back to a small village at Siwai for the drive back to Pokhara after completing a wonderful and fabulous time up in the high mountains.

Drive from Pokhara to Kathmandu or by Flight by a tourist bus – 6hours. Optional: can use fight which takes 25 min.O/N at Kathmandu Hotel.

The journey within the mountains of Nepal comes to an end today!We will transfer you airport as per your flight time.

It was a pleasure to have Nepal Adventure Pilgrimage Treks and Expedition as our guide to ABC. Anil took care of us very well and was (and still is!) a great guide and friend to us all during the whole trip. Even when we arrived back in Kathmandu, he still offered us a good price transport around town as well as suggestions about everthing there. It was a memorable trip and I wouldn't hesitate to go with them again next time around.

You need More or less 1 weeks for Short Annapurna Base Camp Trek from Kathmandu to Kathmandu.But you can combine Ghorapani Pun Hill with in 2 week.

you will have power all the places where you can charge your battery too. It will cost you more or less couple of dollar for full charge.

You can have Wi-Fi all the place.

You will have English speaking professional, experience, first aid trained and government registered certified local guide. They are mostly from all ethnic group of Nepal and picked from root of Himalaya region. We also offer language specific guides if needed such as French, Spanish, Italian etc.

Yes, you can store with us and it will be safe.

Yes, you will get the airport pick up and drop off services available. Our airport representatives will receive you at the airport and transfer you at the hotel in Thamel. Evening is free for you to explore the eateries and bars of the area. Our office will complete all your trekking formalities. Overnight in Hotel

You can obtain your VISA to Nepal either by contacting our embassy or consulate office in your host country. There is a provision of VISA on Arrival to the tourists. As you land in Nepal you can fill up the form and pay the VISA charge at the International Airport in Nepal.

Yes, you can extend your stay in Pokhara. However, if it is not included in your regular itinerary you will have to pay extra as per the services. The set flights or bus tickets; if needs to be changed, the incurred extra charges must be paid by yourself.

Yes, you can upgrade accommodation in Kathmandu and Pokhara. However, it is subjected to be charged extra as per the prior trip agreement.

The distance between Kathmandu and Pokhara is 200 km. There are numerous side roads and it is along the Prithivi Highway. The traffic is high. Therefore, traffic jam may result in the hours of road trip. However, the normal time to reach Pokhara by bus or tourist bus is about 6 – 7 hours.

Yes, you can fly to Pokhara instead of driving. And it takes about 35 - 45 minutes. Please contact the travel planners if you have already booked the road trip. The price of the flight and road trip is subject to availability and the current rates category.

Accommodation in  Short Annapurna Base Camp Trek is in teahouse or lodge. In some places trekkers can get the attached bathroom but most of the time the room is in the general category and have common bathroom without private attached.

You can get the diverse food/meals during the trek to Annapurna Base Camp. If you prefer to have the western menu, then also you can have it. However, try some local delicacies which might help you to understand the local lifestyle too. If you don’t want to try the locals, then the Annapurna base camp trek route offers general western menus.

Spring and Autumn is the best time to Annapurna Base Camp Trek. However, trekkers can do the trekking in either winter or in summer season in Nepal. Please remember that summer season coincides with the monsoon time in Nepal. During this time of the year the cloud blocks the vision of the mountains and it might be frustrating for some. But remember that during off season the trail is tranquil and there won’t be many trekkers.

It is up to you to decide to do the trekking of your liking. Private or Group Trekking, the level of the services and the hospitality we provide is same. Therefore, choose according to your liking.

Yes, it is possible for the beginners too but remember every trekkers must have the sound physical condition as the Annapurna Base Camp Trek reaches up To 4130 m from sea level which involves the trail with uphill and downhill. 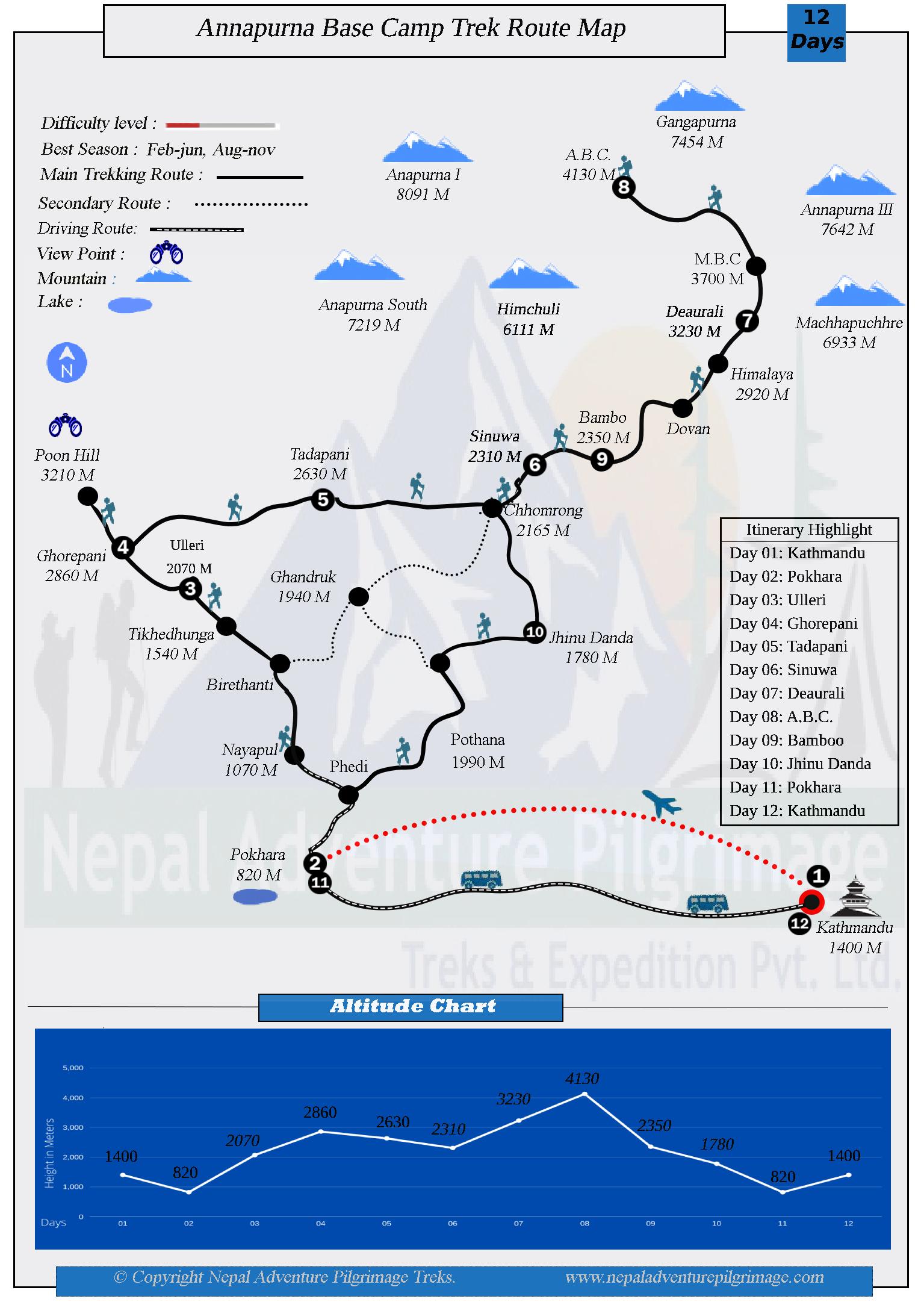 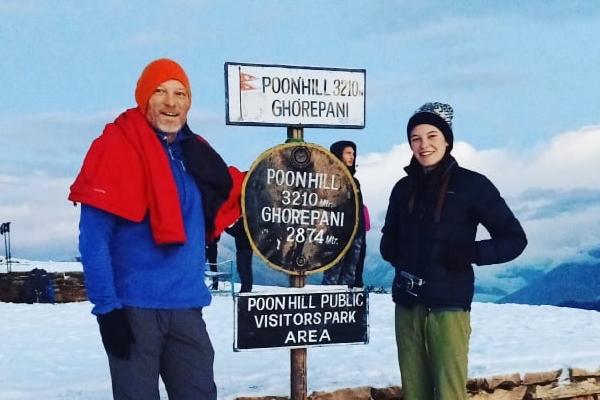 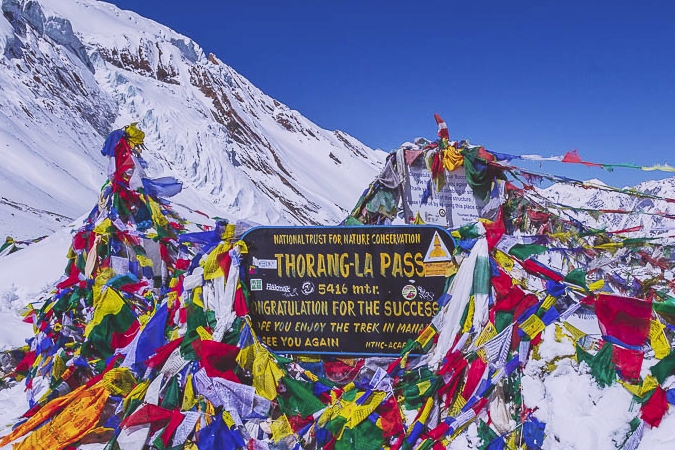 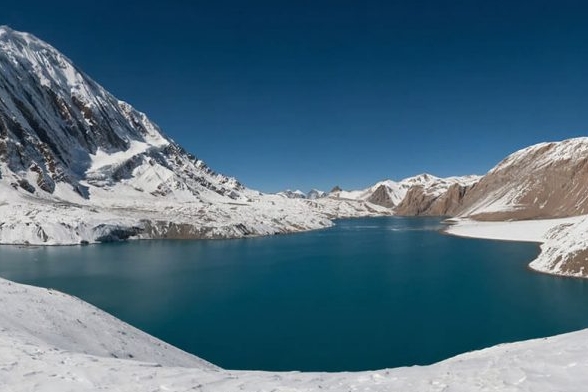